The Baron and Baroness of Stormhold recognise deserving members of the populace of the Barony by bestowing Baronial Awards to thank them for and encourage them in their ongoing efforts.

In order to recognise the deserving, we encourage you to write a recommendation to the Baron and Baroness of Stormhold! Tell us of the wondrous deeds you witness, the marvelous skills you see displayed, and the courtesy you see shown to visitors in our lands. Make sure to check if the person you are recommending has received any Baronial awards from Stormhold on the list of recipients. These show only Baronial awards; Lochac Kingdom Awards (and the older Principality awards) are recorded in Canon Lore, which can also be searched.

Given for worthy deeds in service to the Barony. The token is of a gilt drakkar sailing in a white metal sea, all as a pendant. 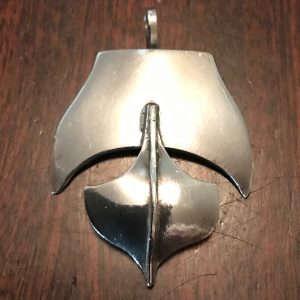 Given for exceptional service by word and deed. The token is a drakkar affronty, as depicted on the Baronial arms, in silver, as a pendant.

On the left is a slightly different silver drakkar, that was presented to Antonia Ruccellai. A small number of tokens like this one were made from the offcuts of silver used to make the baronial coronets. 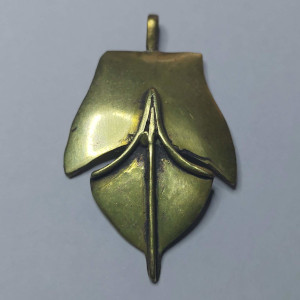 Given for exceptionally gracious behaviour which embodies the spirit of the SCA. The token is a gold drakkar affronty as a pendant. 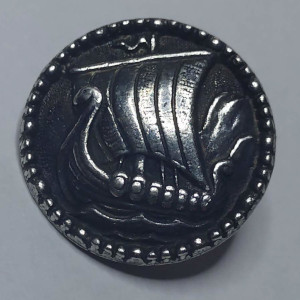 Given to members of the Society who dwell outside the borders of Stormhold, but have greatly aided and enriched the Barony by their efforts. 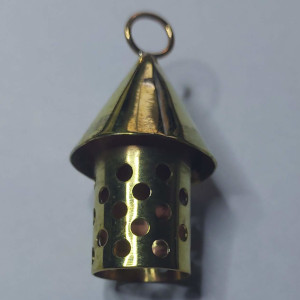 Given for sharing knowledge and lighting the way to understanding. The token is a pendant of a lantern.
The older style of lantern was made by Rudolf van der Drau, and the newer style was made by Benedict of York. 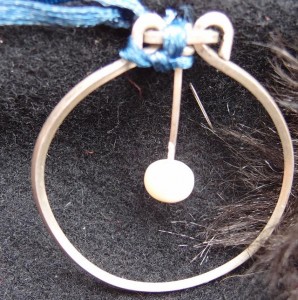 Given for behind-the-scenes work and cleaning up after events. The token is a favour of white cloth with a drakkar embroidered upon it with white thread.

Given for aiding in the defence of the Barony; by prowess locally and afar, by training or by supplying the warriors of Stormhold. The token is a coin depicting a Norse warrior head with helmet and the Latin text “Pro Bellator” (translation: “For the Fighter”) on the front, and a drakkar in profile with the text “Stormhold” on the reverse.
The award was instituted by Baron Hanbal and Baroness Ute.

Given as a gift from the Baron and Baroness to newcomers, close to their second event attended in the Barony. The gift symbolises the warmth of the Barony’s welcome, and can also form the beginnings of a collection of personal garb.
The tradition was instituted by Baron Rodrigo and Baroness Sara. 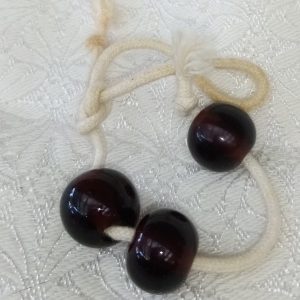 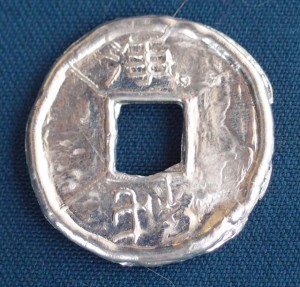 Given to those the B&B felt were deserving of recognition, especially for service to their noble selves.
The Baronial cyphers for the reign of Baron Hanbal and Baroness Ute.

Given to those the B&B felt were deserving of recognition, especially for service to their noble selves.
The Baronial cypher for the reign of Baron Hugh and Baroness Therasa. 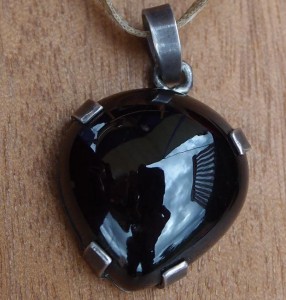 Heart of the Barony

Given to those the B&B felt were deserving of recognition, especially for service to their noble selves.
The Baronial cypher for the reign of Baron Alaine and Baroness Lucrezia. 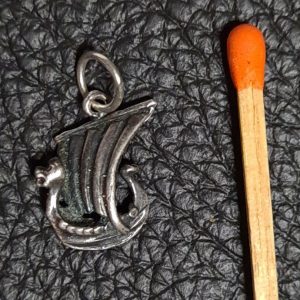 This tiny token was given Baron Sven and Baroness Ingibjorg to those who supported, or fought for, the barony in the Stormhold v. The Known Worlde War at Rowany Festival, AS XXVIII (1994).